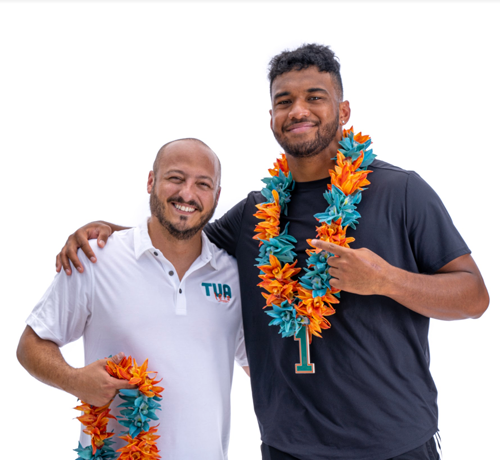 Established by Miami Dolphins Quarterback Tua Tagovailoa, The Tua Foundation and South
Florals Aim to Create a New Tradition for Dolphin Fans While Supporting South Florida Youth
SEPTEMBER 16, 2021, MIAMI – With the Miami Dolphins kicking-off their NFL season with a win last
weekend, today, South Florals Artisan, Arrangements and Gifts and The Tua Foundation are
announcing the launch of the custom designed TUA Leis for all fans to wear this season and show their
gameday Dolphin pride.

Designed specifically for Tua and his fans nationwide, the custom leis are made with either fresh florals
or silk flowers in orange and blue resembling the Miami Dolphin team colors. The TUA Leis are now
available in all of the South Florals retail locations throughout South Florida. The silk TUA Leis are also
available for purchase and shipping nationwide to all 50 states online at: www.southflorals.com/tua.
“Seeing fans wearing TUA Leis will be awesome,” said Tua Tagovailoa, Miami Dolphins Quarterback and
Chairman of the Tua Foundation. “I am excited about this partnership, because through our
Foundation, it will benefit kids in South Florida.”

Teaming up with The Tua Foundation established by Miami Dolphins Quarterback Tua Tagovailoa
earlier this year, proceeds from the TUA Leis by South Florals will benefit The Foundation to further
support the non-profit organization’s youth initiatives, health and wellness, and other charitable causes.
“We are excited to have teamed up with The Tua Foundation and officially launch the TUA Leis that we
created specifically for Miami Dolphins Quarterback Tua Tagovailoa,” commented Daniel Sanchez,
South Florals Founder and CEO. “We know that not only local South Florida Dolphin fans will have a fun
sporting the TUA Leis, but Tua fans all across the country who want to cheer him on while supporting
the non-profit organizations charitable causes.”

In addition to giving back to those the non-profit organization supports including South Florida’s youth,
together South Florals and The Tua Foundation are aiming to build on Tua’s tradition of using floral leis
to create a new tradition amongst Dolphin fans. The hope is to encourage fans to join in on wearing the
leis on game days, interact in a new way, and show their support for Tua and The Foundation.
Part of the Polynesian culture, the lei (a wreath of flowers) is commonly presented upon arriving or
leaving as a symbol of affection. For Tua and his family, the leis have often been given by Tua’s parents

to congratulate big game wins or show support throughout his football career. Stemming back to his
collegiate football days at Alabama, the tradition of the lei with Tua and his parents grew in such
popularity that local companies and venues began handing out leis in Alabama colors to fans on big
game days.

Tua Tagovailoa was the #5 overall pick in the 2020 NFL Draft by the Miami Dolphins after a record-
breaking career at the University of Alabama. He was the highest drafted quarterback by the Dolphins
since 1967. As a freshman at Alabama, he led the team to the College Football National Championship
and was named MVP after throwing a touchdown in overtime to win the game.

Striving to have their flowers in every living room in the U.S., South Florals is one of the top floral
designers in the industry with an extensive selection of floral options. South Florals currently has five
retail flower shop locations throughout South Florida with their new flagship location opening soon in
Miami Beach. Committed to delivering the respect, trust, and personal touch their customers deserve,
their highly specialized design team is focused on creating the most innovative designs with over
600,000 arrangements delivered to satisfied customers. Founded by Daniel Sanchez and Sam Noriega,
together they run and operate various retail, wholesale, and online floral e-commerce platforms.
For more information about TUA Leis, visit: www.southflorals.com/tua